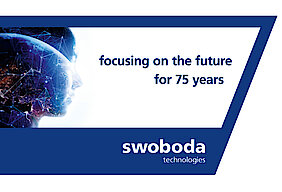 Milestones in our company history.

Companies emerge from ideas. And behind them are always people who want to make a change, who improve, simplify, or completely reinvent something. So it was for Max Swoboda, who founded his company Textil GmbH in Wiggensbach on 18 June 1947. In its early days, it manufactured fabrics, handkerchiefs, and doormats. In 1961, the company entered the automotive supply industry with cable assemblies and continued to develop its products further. Over the course of the following decades, it added the most important major automotive suppliers and, in recent decades, almost all key automakers to its customer base.

Here’s an overview of all of the milestones in our company history.

In 1989, the year of the fall of the Berlin Wall, Kurt Swoboda, Max Swoboda’s son, took over at the helm of the company. A Czech subsidiary was founded in 1994, followed by a US subsidiary in Grand Rapids (Michigan) in 1997, which is celebrating its 25th anniversary this year. This quickly gave the company a presence in Eastern Europe and the US. The Romanian sites in Sibiu and Timişoara followed in 2004 and 2012. Entry to the Chinese market was completed with the establishment of the Kunshan site in 2011, while the company’s globalization strategy was further pursued with the opening of the San Juan del Río site in Mexico in 2014. In 2016, a toolmaking center was added in Fürth.

Two years later, on 1 July 2018, came the merger of Swoboda and Hartmann-exact in Schorndorf, both owned by the Groth family. Hartmann-exact had been established back in 1936 by Eduard Hartmann. Since the merger, both companies have been operating under the Swoboda name, with Swoboda Technologies as the brand.

In the same year, Swoboda established a joint venture with the Franz Morat Group, a medium-sized manufacturer of gear wheels, under the Morat Swoboda Motion name and opened a new plant in Nowa Ruda, Poland. In October 2018, Swoboda broadened its expertise in the area of electronic, hardware, and software development through the acquisition of two companies now named Swoboda Embedded Solutions and Swoboda Embedded Engineering.

Using and supporting the opportunities of the technological transformation

Ever since, in addition to a shared mission, sights have been firmly set on the future as a value-oriented family company. The automotive industry is undergoing a profound transformation, with megatrends such as electromobility, self-driving vehicles, connectivity, and new mobility concepts. Swoboda is using the opportunities presented by this global dynamism in its product portfolio and will play a stronger role in developing complete systems made up of sensors, electronics, and actuators. The company is active in the market segments that are benefiting from the opportunities that come with change and making technology safer, more convenient, and more energy-efficient.

Today, some 4,000 people work at Swoboda on three continents in six countries, serving high-profile customers out of twelve sites. In partnerships based on continuous reliability. As trailblazers, facilitators, and sparring partners. With a focus on what has mattered for decades and will remain so going forward: Swoboda wants to continue to contribute to its customers’ success in their markets for many years to come.