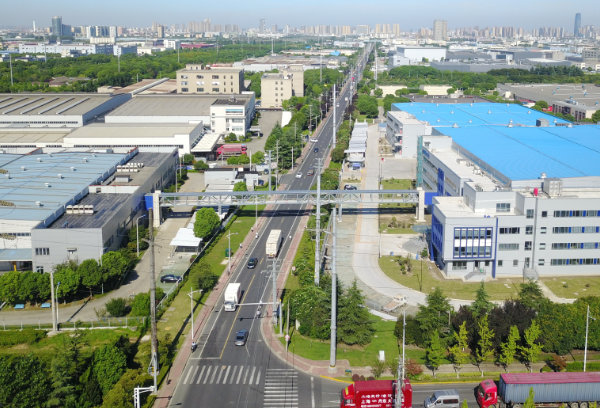 This will allow the technology company, which has produced for the Asian market in China since 2013, to meet their customers’ needs even better at the site and meet the requirements for newly acquired projects. Swoboda is investing over 600 million RMB (approx. 75 million euros) in expanding their factory and currently employs around 800 employees in the East China city.

Safety and Efficiency at a Glance

In the final stage of expansion, the factory in Kunshan will have a total of more than 25,000 square meters of production area and another 20,000 square meters for storage and tool making as well as offices and common areas. In order to utilize the available space as efficiently as possible, the offices were spread across four floors and production across two floors. The factory expansion meets modern construction and environmental standards. “I’m happy about this successful expansion into a fast-growing country that plays a major role in the global automotive industry and in our company’s continued development,” says Swoboda’s owner, Dr. Matthias Groth.

Close attention was also paid to safety aspects. Employees and visitors can easily go back and forth between the former and new parts of the building, via an 84-meter foot bridge, without having to cross the street. With its own company kindergarten and underground parking, Swoboda is introducing another first at the industrial company in Kunshan.

Well Positioned for Further Growth in the Region

At the beginning of October 2019, the first machine found its place in the new building, shortly after which production began. Now several challenging projects have already been carried out in the new building, with production lines working reliably in three shifts. The site produces about 3 million parts and system components per month. „The construction project ran perfectly, from planning to implementation, thanks to the good cooperation of everyone involved. A special thanks goes out to our general contractor, the heads of the industry park KETD as well as our employees, who showed incredible flexibility," says Thomas Cornelius, General Manager in Kunshan.

With a constantly growing engineering team, the company is able to cater to the special local requirements of its customers. Swoboda has already been awarded its customers’ highest distinctions for quality and has received the distinction as a high-tech company from China’s regional government. The site is already set up. The skills range from electrical component assembly to punched part manufacturing, to process engineering and tool making, and the integration of electronic assemblies. An experienced sales team in charge of the Asia-Pacific area completes the set of expertise.